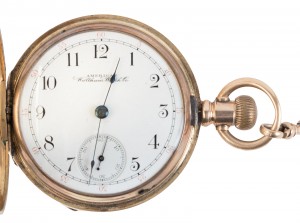 PBA Galleries is pleased to offer the Tyler-Goodwyn Family Archive, an archive of President John Tyler descendants containing approximately 265 letters, documents, writings, and other items, including manuscripts, typed material, partially printed forms, and more, plus silver cups and spoons, an engraved gold watch, and other family memorabilia c.1832-1980. The archive will be offered on Sunday, February 11th in an early morning sale in Pasadena, California to coincide with the 51st California International Antiquarian Book Fair.

An important archive of papers and other items passed down by the descendants of President John Tyler through his eldest son Robert Tyler, who married Priscilla Cooper, and whose daughter Priscilla C. Tyler married Albert T. Goodwyn. The Tylers and the Goodwyns were old Southern families, from South Carolina, Virginia, and Alabama, long involved in the political, economic and social life of the South, and were owners of slaves and plantations. One of the earliest letters is from John Tyler in 1834, to his then 18-year old son Robert, when the elder Tyler was a senator from Virginia, discussing primarily matters of politics and state. The archive includes letters, deeds, wills, bills of sale, and other records detailing numerous transactions in slaves, and in large holdings of land. These latter include the sell-off of land after the Civil War, and re-acquiring assets in the succeeding decades. There are also three letters written by Albert T. Goodwyn while he was a prisoner of the Union forces during the Civil War, held on Johnson’s Island, in Lake Erie off the north shore of Ohio. Following the Civil War, business practices of necessity changed, but large land-owners and slave-holders such as the Goodwyns were able to adapt, and the documents reveal the share-cropping practices that kept the freed slaves in virtual if not actual bondage. There are also a number of papers relating to the curious ownership of a bridge by the Goodwyn family, acquired in the early 20th century. During this period members of the Goodwyn family became more involved in politics, and various papers and speeches reveal the efforts of the Democratic Party in the south to keep power firmly in the hands of white men. Some of the family were of a literary bent, though more whimsical than serious in nature, and there are several stories and essays by Robert Tyler Goodwyn, some treating in “humorous” fashion the relationships between the white patricians of the south and African Americans. There are, finally, artifacts of the family, including a gold pocket watch from the American Waltham Watch Company, with initials and dates of three family members, beginning in 1852. Provenance: Descended in the family. 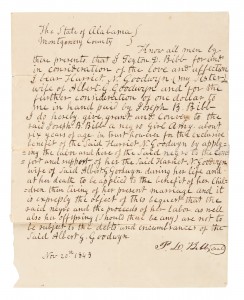 The papers are housed in plastic sleeve in six binders, arranged chronologically in fourteen different subject categories, or sections. You can view the full catalogue entry here with further details

Ten photographic images, some from paintings, portraits of family members,

Letter to son Robert Tyler regarding negotiations with France and their promised payment of $5,000,000 to the U.S. government for violations of trade agreements.

Five items relating to the American Civil War, including three letters from Albert T. Goodwyn to family members when he was a prisoner-of-war at Johnson’s Island, Ohio, in 1864 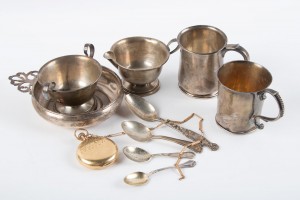 Forty-five document, letters, insurance forms, contracts and other items relating to finance and business, including some involving sharecropping. 1867-1966

Thirty essays, stories, school tests, diplomas, and other fictional and factual writings, a number of them relating to race relations. 1867-1942.

Twenty letters between members of the Tyler-Goodwyn extended family. 1834-1928.

Thirteen wills and related testaments of members of the Tyler-Goodwyn extended family. 1900-1951.

Overall the archive is in very good condition, with normal wear associated with age, use, and storage, some of the earlier papers with neat archival tape repairs.