Call of the Wild Modern Literature on July 26th 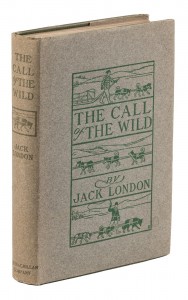 The Call of the Wild in beautiful dust jacket

On Thursday, July 26th, PBA Galleries will host a sale of over 550 lots of fine literature, mostly from the 20th century, with a few from earlier times, and a handful from our current millennium. Included are first editions of key works by the major authors of our time, most in the original dust jackets, many signed or inscribed. There is a large selection of works by Charles Bukowski, with a number of limited editions containing original oil paintings by the rogue poet. Also present are significant works or sizable collections by William S. Burroughs, Truman Capote, Willa Cather, Stephen Crane, John Fante, F. Scott Fitzgerald, Graham Greene, Ernest Hemingway, Jack Kerouac, Stephen King, Jack London, Flannery O’Connor, Michael Shaara, Mark Twain, Kurt Vonnegut, Jr., Richard Wright, and many others.

A first edition of Jack London’s best and most enduring work, The Call of the Wild, is a highlight of the sale. Published in 1903 shortly after its serialized appearance in the Saturday Evening Post, it contains Illustrations by Philip R. Goodwin and Charles Livingston Bull and page decorations by Charles E. Hooper. Rarely is a copy found in such a beautifully preserved dust jacket. (Estimate: $3,000-$5,000)

Featured in the sale is one of the most influential books ever written, Uncle Tom’s Cabin; or, Life Among the Lowly by Harriet Beecher Stowe. Immensely popular when published in 1852, the anti-slavery novel helped fuel the abolitionist movement in the mid-19th century. This first printing is in the original gilt stamped and lettered cloth. (Estimate: $3,000-$5,000)

Richard Wright’s memoir of his youth in the South, Black Boy, originally was titled American Hunger and contained a second part about his young adult life in Chicago. When Black Boy was published without these chapters, Wright gave his eventual biographer, Constance Webb, permission to publish them. Offered in this sale is one of the rare First Edition which was limited to 500 numbered copies published for private circulation. (Estimate: $2,000-$3,000) 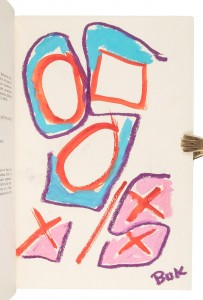 Bukowski original art in South of No North

A scarce deluxe copy of Bukowski’s first short story collection with Black Sparrow, South of No North: Stories of the Buried Life, contains original artwork by the author. This is No. 46 of 60 deluxe copies of the First Edition, 50 of which were for sale. A colorful work of art in what appears to be pastels and signed “Buk” in large purple letters is tipped in following the title pages. (Estimate: $3,000-$5,000) 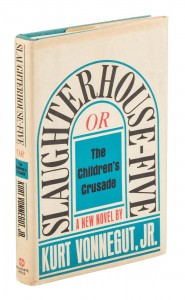