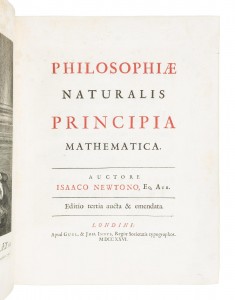 On Thursday, November 30th, PBA Galleries will offer The Richard E. Bateman Collection on Celestial Mechanics with Rare Books & Manuscripts from various other consignors. The Bateman Collection features key works in astronomy, mathematics, the physical sciences, and more, from Newton to Euler, Lagrange and Laplace. In addition, there are high spots in Americana, literature, illustrated and color plate books, fine printings, autograph material, travel and exploration, and much more. Included are important works by William Shakespeare, John Muir, Cervantes, Rudolph Ackermann, even Barack Obama’s fifth grade yearbook inscribed by him.

Sir Isaac Newton’s great work, Philosophiae naturalis principia mathematica, from 1726, is offered in the rare large paper copy on thick paper of the desirable third edition. This was the last Principia issued in Newton’s lifetime with his revisions and covers Newton’s famous three laws of motion as well as his treatises on fluid motion and celestial mechanics under the principle of gravitation (Estimate: $7,500-$10,000). Also in the celestial mechanics part of the sale is Méchanique Analitique by Joseph Louis Lagrange, 1788, the first edition of his foundation work on analytical mechanics Lagrange extended and further developed Newton’s work on mechanics. transformed theoretical mechanics into a system from which fundamental equations describing the motions of any systems of bodies could be derived (Estimate: $8,000-$12,000). 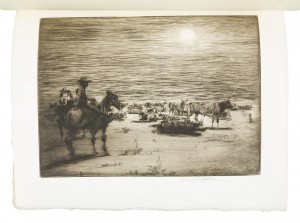 Cowboy Stuff by F.W. LaFrentz, 1927, with 50 outstanding etched plates by Henry Ziegler, is one of 12 copies printed on handmade paper. Bound in full morocco tooled in gilt, this lavish volume is an exceedingly rare presentation copy of the Lincoln Memorial Edition, signed by LaFrentz, Ziegler and the publishers (Estimate: $10,000-$15,000). Another highlight from the Americana section is Barack Obama’s 5th grade yearbook from Punahou School in Honolulu, Hawaii. The yearbook is inscribed to a classmate by the future 44th President of the United States, “Barry Obama” (Estimate: $10,000-$15,000).

Three works published in London are also featured in the sale: The Tragedies of King Lear, Othello, and Anthony and Cleopatra, three of Shakespeare’s greatest tragedies from the 1632 second folio are bound together in a single volume (Estimate: $20,000-$30,000); Rudolph Ackermann’s Microcosm of London, 3 volumes, 1808-1810, with 104 hand-colored aquatint plates by Rowlandson and Pugin, an early state of the first edition (Estimate: $8,000-$12,000)’ and the most famous book on pirates, Bucaniers of America by John Esquemeling, 1684-5, two volumes bound together, contains numerous engraved illustrations and maps. (Estimate: $8,000-$12,000). 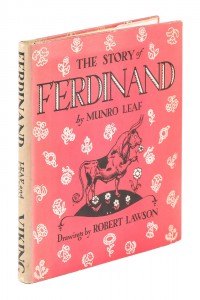 The Story of Ferdinand

The Story of Ferdinand, Munro Leaf’s captivating tale of a peaceful bull who resists the call of the ring, and would rather sniff flowers instead will be on the block. A fine first edition in pictorial dust jacket, includes an inscription by the author and a sketch of Ferdinand (Estimate: $10,000-$15,000).

The sale will begin at 11:00 am Pacific Time and the public may preview the auction Monday, November 27th from 1-5pm, Tuesday and Wednesday, November 28th and 29th, from 9am-5pm and on Thursday, November 30th, 9-11am at PBA Galleries in San Francisco. For more information, please contact the galleries at (415) 989-2665 or [email protected]