City Directories – A Link to the Past 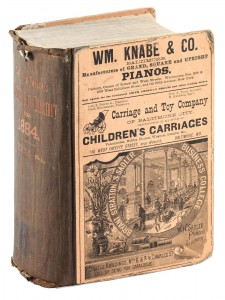 Business directories filled the basic need for the reference of information for daily, local life. Replaced today by Yelp, Google, and online profiles, for centuries they were the primary resource for business and individuals to connect with each other and other services. Now, these rich records serve as a roadmap of personal heritage and American commerce. The first American directory appeared in 1782, published within The South Carolina and Georgia Almanac, followed three years later by the first separately published directory in Philadelphia. Naturally, as America grew from an early independent nation, so did the popularity and use of directories to connect and inform citizens.

Comparing a city’s directory, year to year, one can follow the opening and closing of businesses, the bursts within industries leading to clashes among competitors, and the eventual victory of one over another. Livery companies fade to automobiles dealers, while The Roosevelt Hotel of New Orleans endures despite the challenges of decades. Blended in are the striking visuals of the ever-competing advertisements bordering page text, printed on the page ends, and compacted together on both front and rear covers, every surface is covered. A handsomely colored print insert competes with the boldly-titled word “Undertaker” and the comical illustration of a wheel-faced man, with raised fists, “knocking out” a horse (an advertisement for Four Wheel Drive Wagon Co.). The nuances of each volume offer their own particular charm, some including the town’s history, city bands, maps, or even lists of local married women.

The records detail a history likely not found by the web crawlers of Google and present a comprehensive picture of a city, however ordinary it may have appeared at the time. Here, in present day, we can find our own stories and the answers to personal questions of identity and origin. Where did your great aunt live in San Francisco before the 1906 earthquake? Where did your grandfather operate his drugstore in Chicago? How did your great grandmother support herself when she first moved to the United States?

On June 16, 2016, PBA Galleries Sale 588 will take place, offering a rare collection of business directories. The collection spans the 19th and early 20th centuries from cities across the United States. Previous directory highlights have included the second Biennial Directory of the City of Topeka from 1870 which sold for $2400; the R.L. Polk & Co’s Ottawa City Directory of 1924 which sold for $1,400 containing a list of Ottawan secret societies; and The San Francisco Telephone Directory of 1902 including yellow pages in Chinese. Directories regularly appear in PBA’s Americana auctions giving the chance to discover your own history. Sales are posted on the PBA website approximately 3 weeks prior to the auction.