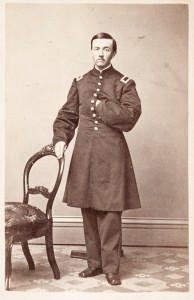 As our country commemorates the 150th anniversary of two major battles of the Civil War this month, we have two amazing archives of Civil War memorabilia.  One of the archives consists primarily of a series of diaries kept by a soldier and the other is a collection of artifacts.


James Clinton Woodworth was born May 10, 1839 in Worchester, Massachusetts. Educated in Worchester and in Boston, he enlisted in the 25th Regiment of the Massachusetts Volunteers Infantry, Company H on September 13th, 1861 at the age of twenty-two. The 25th was organized at Worchester in September – October 1861.  The 25th Regiment spent the majority of the war in North Carolina and Virginia losing a total of 330 men during the war.  Lt. Woodworth sustained a severe injury to his wrist at Cold Harbor, four months before the end of his duty.  Lt. Woodworth kept a diary during his military service beginning 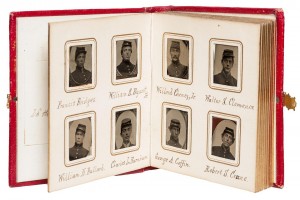 September 25, 1861 and which ended on October 20, 1864 when he was mustered out after being ordered home two weeks before.  His diary continues through the fall of 1865 when he moved to Fort Wayne, Indiana.

His diaries give a graphic detail of the movements and engagements of Company H and the personal experiences of Lt. Woodworth.   Legibly written, it is easy to follow him as he sees his first man wounded in battle to the “sad news” of Lincoln’s assassination.  The archive also includes an album in pristine condition of 73 tin-type photographs, most identified, of the members of Company H.  The estimate for this intriguing archive is $25,000 – $35,000. 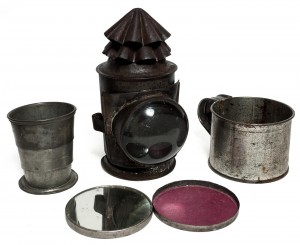 Calvin Otto’s area of collecting interest was mainly early American printed ephemera dealing with the book trade.  However, he was involved in a Civil War exhibit for which he collected some interesting artifacts. This archive consists of a number of pieces consistent with the Civil War period.  There is a bag of brass military uniform buttons, religious items carried by soldiers, bullets, and other uniform accoutrements. My personal favorites in the archive are the small lantern with the magnifying lens, the small brass sewing kit, the tin collapsible cup and the metal matchstick holder.  The estimate for this lot is $700 – $1000.

Lastly, I want to mention the Frank Bennett Fiske archive.  It is not Civil War related but it is still very important and historically valuable.  Bruce MacMakin discusses it in our video highlights.

Please join us on Thursday, July 25th for the sale of these and almost 400 other historic autographs, manuscripts and archives.