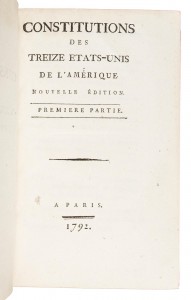 1st French edition of US Constitution

On Thursday, July 12th, PBA Galleries will host an auction of Fine Americana – Travel & Exploration – World History – Cartography with over 700 lots of rare and interesting material, ranging from colonial America and the Revolution through to heady days of the Gold Rush, the tragedy of the Civil War, and the settling of the plains and mountain west, culminating in civil rights movements of the 20th century. Beyond the North American continent are voyages to the far reaches of the globe, and scarce historical accounts of the clashes of competing cultures. A large selection of maps shows the growth of geographic knowledge of the world, and charts the expansion of civilizations. The eclectic gathering includes printed books, manuscripts, letters, ephemera, photographs, maps, atlases, and much more. 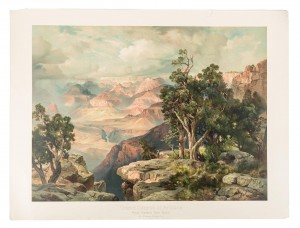 Two lots of graphic arts are featured in the sale. A majestic elephant folio chromolithograph of the Grand Canyon by Thomas Moran shows a tremendous sweep of the scenery from Hermit Run with the bright colors of the Canyon against the turbulent colors of the sky (Estimate: $3,000-$5,000). A second state print of the famous 1583 Jodocus Hondius portrait of Sir Francis Drake is generally considered the best contemporary portrait of the famed explorer (Estimate: $3,000-$5,000).

Great-Britain’s Coasting Pilot, by Greenville Collins, contains 48 engraved plates, most of them double-page charts of ports, harbors and coasts of England, Scotland, and Wales, and printed on thick paper is featured from the Travel & Exploration part of the sale (Estimate: $5,000-$8,000). The first British edition of William Bartram’s Travels through North and South Carolina, Georgia, East & West Florida is a classic account of Southern natural history and exploration with much information on the Indian tribes of the south. (Estimate: $3,000-$5,000). 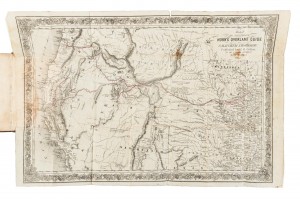 Additional highlights include three lots with ties to California and the West: the first edition of Hosea Horn’s Overland Guide from Council Bluffs to Sacramento, from 1852, is considered among the best guides of the Gold Rush period, and has a large folding map (Estimate: $4,000-$6,000); a prospectus or proof sheet for the first California newspaper, The Californian, Volume 1, Number 1, 1846, published in broadsheet format by Walter Colton and printed on the press used by California’s first printer, Agustin V. Zamorano (Estimate: $3,000-$5,000); and a 1764 first English edition of The History of Kamtschatka, and the Kurilski Islands, by Stephan Krasheninnikov, which contains one of the earliest descriptions of Russian America (Estimate: $3,000-$5,000).

Finally, featured from the Cartography section of the auction, H.H. Lloyd’s detailed wall map in pocket form, 12000 Square Miles Around New York City, published in 1866, shows the environs of New York City on a scale of two and one-half miles to the inch. The map extends from Long Branch on the Jersey Shore to Rhinebeck in the Hudson Valley; and from Patchogue on Long Island to Trenton, New Jersey. The map is so detailed that even blacksmith shops are located. (Estimate: $3,000-$5,000)