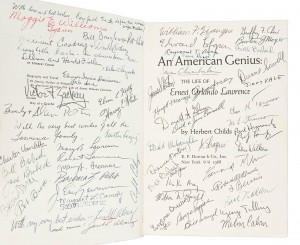 On Thursday, September 9th, PBA Galleries will kick off their fall auctions with a Fine Literature and Books in All Fields Sale. On offer, will be over 600 lots of modern first editions, literary landmarks, poetry, science fiction, detective fiction, books in rare, early dust jackets, finely bound books and sets, illustrated and children’s books, early printed books, and much more.

Featured in the Books in All Fields section of the sale is a first edition of An American Genius. The Life of Ernest Orlando Lawrence. A biography of the founder of the Lawrence Berkeley and Lawrence Livermore laboratories, the author inscribed this copy at the opening event of the Lawrence Hall of Science, in Berkeley on May 20, 1968. This copy was also signed, on four pages, by more than 40 scientists, veterans of the Manhattan Project, laboratory staff, officials, and Lawrence family members, including ten Nobel Prize winners. (Estimate: $10,000-$15,000) 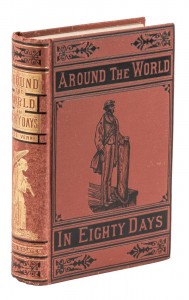 Around the World in Eighty Days in Dust Jacket

An early American edition of Jules Verne’s masterpiece, Around the World in Eighty Days, c.1878, is a highlight of the literature portion of the sale. In the rare original printed dust jacket, from Porter & Coates, this is a later impression of the first American illustrated edition that appeared in November 1873. (Estimate: $3,000-$5,000)
A first edition of Stephen King’s first published book, Carrie, about a bullied high school girl with telekinetic powers is inscribed and signed by the author. The book is the basis for the Brian DePalma film which earned Sissy Spacek and Piper Laurie Academy Award nominations and is one of the most commonly banned books in American schools. (Estimate: $1,500-$2,000)
The Black Sparrow edition of John Fante’s, Ask the Dust, bears signatures of both Fante and Charles Bukowski who wrote the preface. Fante was one of Bukowski’s literary idols having discovered his writings while researching writing that spoke to him at the Los Angeles Public Library. Of Ask the Dust, Bukowski writes “this one is my favorite because it was my first discovery of the magic.” (Estimate: $1,000-$1,500) 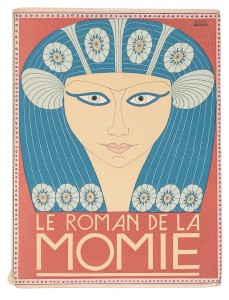 Louis Auchincloss’ Civil Wars, illustrated by Elliott Banfield is accompanied by an extra suite of signed prints. Bound in half green morocco and handmade pastepapers by Luke Ives Pontifell, it is one of 175 copies from the Thornwillow Press signed by the author, illustrator and book designer (Estimate: $1,000-$1,500). Another beautifully illustrated book in the auction is Théophile Gautier’s Le Roman de la Momie, with color wood engravings by Gasperini after George Barbier. In the original printed wrappers, this is one of 834 copies published by Mornay in 1929 on Rives (Estimate: $1,000-$1,500).

Other featured lots include: A Hitherto Unpublished Manuscript by Richard Wright Being a Continuation of Black Boy, the rare, privately printed final section of Wright’s autobiography, dropped from the original edition but here published with Wright’s permission by his biographer (Estimate: $1,000-$1,500); Palmer Cox’s The Brownies Through the Union, first edition, 1895, in the rare original dust jacket matching the design of the boards (Estimate: $1,000-$1,500); and a first printing of Alexander Pope’s “The Rape of the Lock,” 1712, one of numerous poems by Pope in the first edition of Miscellaneous Poems and Translation, By Several Hands (Estimate: $1,000-$1,500).

The sale will begin at 11:00 am Pacific Time and the public may preview the auction Tuesday and Wednesday, September 4th and 5th, 9am-5pm and on Thursday, September 6th, 9-11am at PBA Galleries in San Francisco. For more information, please contact the galleries at (415) 989-2665 or [email protected]