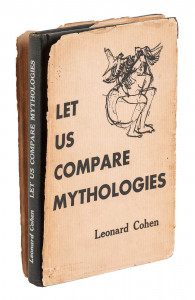 The sale features works with rare signatures or inscriptions by the author. Poet/singer/songwriter Leonard Cohen’s rare first book, Let Us Compare Mythologies, is inscribed by the author with the year of publication ($8,000-$12,000). PBA Galleries has a presentation copy of Ayn Rand’s seminal Atlas Shrugged, inscribed and signed by the author on the front endpaper in a sixth printing in the original dust jacket ($1,500-$2,500). Each poem in a significant collection of 68 typed poems by George Sterling is signed in ink by the poet, some with ink corrections or alterations in his hand ($2,000-$3,000).

Scarce first editions of 19th-century novels will be on the auction. The section includes Barchester Towers by Anthony Trollope in three volumes, the first issue of the first edition of one of the author’s most important novels in the original cloth ($1,500-$2,500). Also in the original cloth is a first edition of Nathaniel Hawthorne’s Twice-Told Tales, the scarcer “tall copy” with a wide two-inch bottom margin ($1,500-$2,500). A first American edition of Arthur Conan Doyle’s A Study in Scarlet, the first Sherlock Holmes novel, is offered, published in Philadelphia in 1890 and finely bound in modern full morocco ($2,000-$3,000). 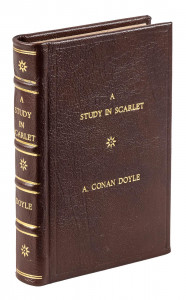 PBA Galleries will offer a mimeographed typescript of John Steinbeck’s unpublished novella Lifeboat, created (and then hated) by Steinbeck in 1943 to serve as the basis for the Alfred Hitchcock film of the same name. After watching the finished film, Steinbeck disliked it so much that he asked to have his name removed from the credits. ($1,000-$1,500).

Other featured lots include Madeleine L’Engle’s classic novel for young people, A Wrinkle in Time from 1962, the first edition, in an unrestored example of the earliest state of the dust jacket ($3,000-$5,000). Also for sale is the first impression, third state of the first edition of the culminating volume in J.R.R. Tolkien’s epic trilogy The Lord of the Rings, The Return of the King: Published in 1962, this volume is offered in the original dust jacket ($1,500-2,500).

The sale will begin at 11:00 am Pacific Time and the public may preview the auction Monday, March 18th from 1-5pm, Tuesday and Wednesday, March 19th-20th from 9am-5pm, and Thursday, March 21st from 9-11am at PBA Galleries in San Francisco. For more information, please contact the galleries at (415) 989-2665 or [email protected].