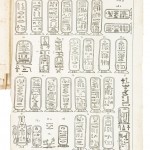 A first edition of Jean-François Champollion’s seminal work on deciphering Egyptian hieroglyphs highlights PBA Galleries’ Fine Literature & Fine Books sale on July 27th, 2017. This copy of Lettre… relative à l’alphabet des hiéroglyphiqes phonétiques… in the original wrappers, includes the four folding lithographed plates depicting hieroglyphic cartouches and demotic inscriptions, and a table of symbols identified as phonetic. This is the first account of Champollion’s method for assigning phonetic values of Egyptian hieroglyphs, based on a study of the Rosetta Stone. From these initial researches Champollion progressed to more comprehensive deciphering, making the texts of ancient Egypt, including the Rosetta Stone on which he worked from 1822-24, accessible to his contemporaries, forming the basis of modern Egyptology (Estimate: $30,000-$50,000)

Featured in the sale is a first American edition of Herman Melville’s Moby-Dick. Considered by many to be the most important American novel of the 19th century, this copy is finely bound in full brown levant morocco. The first American edition followed the English edition by a month and contains thirty-five passages and the “Epilogue” omitted in London. When it was published, the book was considered a failure, misunderstood by critics and ignored by the public (Estimate: $7,000-$10,000). 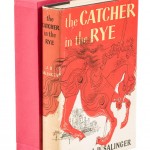 Catcher in the Rye

Other literature offered in the sale include a first edition, first issue in dust jacket of Catcher in the Rye, J. D. Salinger’s classic story of “cynical adolescent” Holden Caulfield (Estimate: $4,000-$6,000); a first edition of the great poem of the 20th century and T. S. Eliot’s most famous work, The Waste Land (Estimate: $8,000-$12,000); and a scarce first edition of Blazing Guns on the Chisholm Trail, a “rip-roaring tale of the old West” which served as the basis for the 1948 film Red River, directed and produced by Howard Hawks and starring John Wayne and Montgomery Clift (Estimate: $2,000-$3,000).

Also in the auction is a first edition of The Decline and Fall of the Roman Empire, one of the greatest historical works in English. Written by the English historian, Edward Gibbon, the work was issued in six volumes over a span of thirteen years. This copy is offered together with the first edition of Gibbon’s Miscellaneous Works in two volumes, 1796, uniformly bound with and from the same publisher as the Decline and Fall (Estimate: $15,000-$25,000). 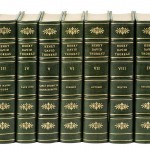 The Writings of Henry David Thoreau

Additional notable lots are a large paper limited edition of Henry David Thoreau’s Writings in 11 volumes, published in 1894 and beautifully bound in full green morocco (Estimate: $3,000-$5,000); Astrolabium by Franz Ritter, a 1660 rare work on the construction and use of astrolabes with numerous engraved illustrations and bound in period full vellum (Estimate: $3,000-$5,000); and four complete plays – The life and death of King John, The Merry Wives of Windsor, The Life of Tymon of Athens, and The Winters Tale – each from the 1632 second folio edition of Shakespeare’s works (Estimates: $6,000-$9,000 each).

The sale has over 400 lots including more fine literature from the 17th to 21st centuries, plus a selection of rare, interesting and unusual books and manuscript material from the 13th century onward. 19th century three-deckers give way to poetry and novels of the Beat generation, with high spots from Stephen Crane to J.R.R. Tolkien and translations of Neoplatonist philosophers, with finely bound books and sets, medieval manuscript leaves, important science and medical works, and much more.