An extremely rare and highly important album of Albertypes from photographs by William Henry Jackson, containing the first photographic views of the Yellowstone, which were instrumental in its establishment as the first U.S. national park, will be auctioned at 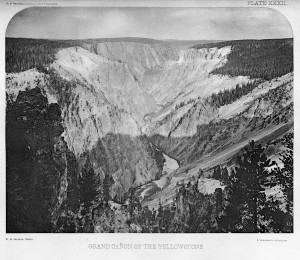 The Grand Canyon of Yellowstone

PBA Galleries in San Francisco on October 20, 2016. The bound volume of 76 proof images, produced in 1874, was made from Jackson’s glass plate negatives using the Albertype process, a then-new German technique to reproduce photographs. Only a handful of the albums survived, and none as complete as the present copy, the scarcity caused by a fire in the studio of the photographer and engraver Edward Bierstadt in early 1875 that destroyed most of the Albertypes he had printed, as well as virtually all of the original glass negatives. The discovery of the album by collector Robert Enteen in the summer of 2015 sent shock waves through the tight-knit community of photographic scholars and collectors, as the first views of the wonders of the Yellowstone came to light. The album has been on exhibit at the Buffalo Bill Center of the West, in Cody, Wyoming, where it will remain until the middle of August, 2016.

William Henry Jackson was in the early stages of his very long career as a photographer when he joined Ferdinand V. Hayden of the U.S. Geological Survey on an expedition to investigate the marvels of what is now the Yellowstone National Park. Jackson took hundreds of photographs of the towering mountains, the breathtaking canyons, the bubbling hot springs, and the steamy geysers, creating glass plate negatives using the painstaking wet-collodion process, his studio borne by a mule. His photographs verified the amazing natural wonders to a fascinated nation, and led to the creation in early 1872 of the first national park out of “a tract of land fifty by sixty-five miles” at the Yellowstone. Hayden, leader of the expedition to the Yellowstone, was a promoter as well as a scientist, and saw Jackson’s photographs as a prime means to publicize the new park as well as help procure funding for future government surveys.

The technique to be used in their reproduction, the Albertype process developed in Germany, was a refinement of the collotype, a screenless photomechanical reproduction technique that allows high-quality prints from continuous-tone photographic negatives. Edward Bierstadt, brother of the noted artist Albert Bierstadt, had purchased rights to the Albertype, and was contracted by Hayden to produce albums of “about one-hundred illustrations, printed by the Albertype process from photographic negatives taken by Mr. Jackson.” He began by creating the proof albums, but got no further before the disastrous fire occurred.

There are five known sets of the Albertypes to have survived – the present set, of 76 images, the prints tipped into the cloth binding and protected by separation leaves, with the frame of each print identifying it as being a William Henry Jackson printed by Edward Bierstadt via the Albertype process; a set at the Clark Art Museum in Williamstown, Massachusetts, containing 56 prints; a set at the Denver Public Library with about 30 images; and two lesser sets. Thirteen of the 76 Albertypes in the present volume do not exist in any of the four other known sets. Experts who have examined the album feel the images are of higher quality that those in the Clark set. 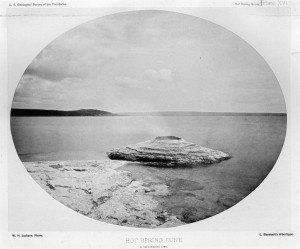 The significance of the bound volume of Albertypes is underscored by the enthusiastic reception and praise by scholars and experts in the field. The exhibit of the album and the display of 54 enlargements of selected prints at the Buffalo Bill Center of the West, which began on March 21, 2016, and will last through August 14, have enthralled the public and excited collectors. An article in The Photograph Collector Newsletter, March 2016, lauds the exhibit and details the importance of the album. Dr. Matthew Hermes, Research Associate Professor in the Department of Bioengineering at Clemson University in South Carolina, who worked with Mr. Enteen in verifying the authenticity and importance of the album, wrote a lengthy article on the album and the exhibit for Points West, the magazine of the Buffalo Bill Center of the West. He describes the Albertypes as “beautiful, with tonal qualities that make them indistinguishable from Jackson’s original albumen prints,” and further, the “Enteen prints present an essentially complete pictorial record of the Hayden 1871 survey. They are beautifully preserved and demonstrate the remarkable ability to present the art, composition, and content of the early glass plate photographs.”

This rare and important album is now being offered for sale at public auction, at the request of the owner, Mr. Robert Enteen, at PBA Galleries’ sale on October 20, 2016, of “Americana, with the National Parks.” The timing of the auction is serendipitous, coming in the centennial year of the National Park Service, which was founded in 1916. The presale estimate for the album is $80,000 to $120,000.