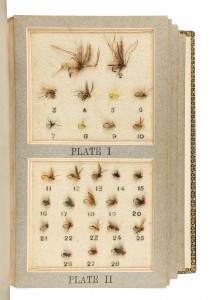 On Thursday, October 19th, PBA Galleries is privileged to host Part II of The Richard Beagle Collection of Angling & Sporting Books with Americana, Travel & Exploration, and Cartography. On offer, will be over 400 lots of rare and significant books, manuscripts, maps, and related material, including items from the premier angling and sporting library formed by Richard Beagle. Key to the collection are fine limited editions with mounted specimens of tied flies; first editions of important accounts of angling in Britain and America; presentation copies of fishing books by Zane Gray; uncommon narratives of bird shooting and big game hunting; and other rarities. Accompanying the angling and sporting books is an array of interesting and unusual materials on the Americas and the world at large, with manuscripts of African American import, documents from old Mexico, scarce California ephemera, Hawaiiana, travels to the far reaches of the globe, and more.

A highlight of the sale is a deluxe issue of the first edition of Leonard West’s The Natural Trout Fly and Its Imitation published in 1912. Illustrated with 13 color plates of flies, the book also contains a total of 108 specimen flies mounted on five thick leaves. Bound in full green morocco with double gilt-rule borders, lettered in gilt and all edges gilt, it is one of only a few deluxe copies of an unknown total but speculated at no more than 30 given the scarcity of copies appearing at auction (Estimate: $7,000-$10,000). 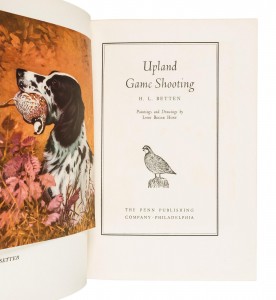 Another angling highlight is F. M. Halford’s Dry Fly Entomology: A Brief Description of Leading Types of Natural Insects Serving as Food for Trout and Grayling with the 100 Best Patterns of Floating Flies and the Carious Methods of Dressing Them, in two volumes published in 1897. One of only 100 copies of the Edition De Luxe, the second volume contains 100 actual specimens of tied flies (Estimate: $7,000-$10,000).
Other featured lots in the angling section of the sale include a special presentation copy of Zane Grey’s Tales of Southern Rivers inscribed by Grey to his son Loren (Estimate: $5,000-$8,000) and the miniature Book of Small Flies by Rene Harrop and others, one of 60 copies with eight tiny tied flies in a special wooden case (Estimate: $4,000-$6,000).

A scarce deluxe issue of H. L. Betten’s Upland Game Shooting is a highlight of the sporting lots in the sale. Signed by the author on the limitation page and illustrated from paintings and drawings by Lynn Bogue Hunt with ten tipped-in color plates, this is one of the most desirable of 10th century sporting books (Estimate $2,000-$3,000). 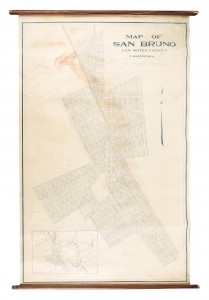 Featured lots in the Americana section of the sale include: a rare wall map of San Bruno, California from 1915, issued just one year after the city south of San Francisco was incorporated (Estimate: $3,000- $5,000); John Muir’s The Mountains of California, first edition, signed by the author and with a letter from him to close friend Charles Keeler tipped in (Estimate: $2,000-$3,000); Samuel Johnson’s Taxation No Tyranny!, 1775, in which the great English lexicographer argues the Crown has the right to tax the unruly American colonies (Estimate: $2,000-$3,000); and two mammoth plate albumen photographs c.1865-66, by Carleton E. Watkins of Tacoye, the Half Dome, 5500 feet, Yosemite, a striking view with the Merced River in the foreground and Section of the Grizzly Giant with Galen Clark, Mariposa Grove, Yosemite (Estimate: $2,000-$3,000 each).