One of the rarest and greatest of 19th century camellia books, Nouvelle Iconographie des Camellias contains nearly 500 luminous hand-colored plates of the large showy flowers. Published by the Verschaffelt family of nurserymen specializing in camellias, the book was a catalogue of the plants available from their nurseries. It was released in monthly parts between 1848 and 1860 with each issue containing four plates. This is a rare nearly complete set missing only the years 1848, 1857 and 1858 in very good condition. (Estimate: $8,000/$12,000)

A superb album of twenty original sketches by the noted American etcher Bernhardt Wall. His subjects include Woodrow Wilson, Theodore Roosevelt, Mark Twain, Fannie Brice, and other celebrities of the day. The sketches are titled on the mount in Wall’s hand and most have brief explanatory notes as to date and place of the sketching and other details. The sketch of George R. Boynton is a striking watercolor portrait and also included is an original etching of actress Billie Burke. (Estimate: $7,000/$10,000)

The Art Institute of Chicago: 100 Masterpieces was issued as one of four major events celebrating the Art Institute’s 100th birthday. One of 100 deluxe copies it is signed, as issued, by five of the world’s greatest 20th century artists: Marc Chagall, Georgia O’Keeffe, Joan Miro, Ivan Albright and Willem de Kooning. (Estimate: $3,000/$5,000) 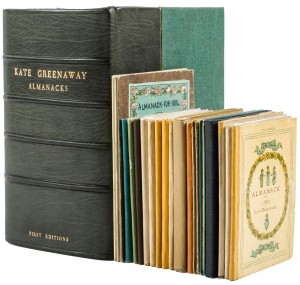 Other highlights of the sale include a rare complete set of Kate Greenaway’s Almanacks including several variant copies housed in a custom box (Estimate: $4,000/$7,000); Ave Maria – An Interpretation from Walt “Fantasia” Inspired by the Music of Franz Schubert, lyrics by Rachel Field signed by Walt Disney and Rachel Field (Estimate: 44,000/$6,000); one of only 300 copies issued, the rare Peter Pan Portfolio, among the most desirable of Arthur Rackham’s illustrated volumes (Estimate: $4,000/$6,000); and a signed limited edition of Hansel and Gretel and Other Stories fantastically illustrated by Kay Nielsen (Estimate: $3,000/$5,000).

The sale will begin at 11:00am Pacific Time. The public may preview the auction Monday, November 28th, 1 – 5pm, Tuesday and Wednesday, November 29th and 30th, 9am – 5pm; and Thursday, December 1st, 9-11am or by appointment at PBA Galleries in San Francisco. PBA accepts absentee bids by phone, fax or email or bids may be placed during the sale in person or online. The entire catalog may be viewed at www.pbagalleries.com. For more information, please contact PBA at (415) 989-2665 or [email protected]