Miniature Books from a Gentleman Collector 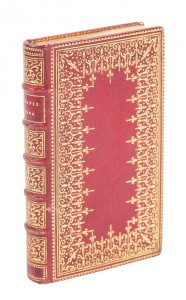 On Thursday, August 24th, PBA Galleries will offer more than 300 lots of fine miniature books from the library of an East Coast gentleman. Included are many fine individual volumes along with complete or nearly complete collections from some of the best known modern publishers of miniature books. A selection of antiquarian miniatures is included as well. Among the rarities are nine different versions of the Rosemary Press printings of the Rubaiyat of Omar Khayyam, many of which have never appeared at auction before; the 1828 Opera of Horace in microscopic 2.5-point type; a complete gathering of the REM Miniatures Dard Hunter books, a collection of 10 fine miniature artist’s books by Soraya Marcano, most issued in editions of less than 10 copies and rarely encountered; along with many, many other desirable volumes. Other highlights of the sale include substantial collections from the Black Cat Press, the Hillside Press, the Press of Ward Schori, REM Miniatures, Achille J. St. Onge, and collections of many other miniature publishers. Many former holders of the record for the smallest printed book in the world are also represented along with a significant number of micro-miniatures, perfectly sized for the doll’s house library.

A miniature typographical wonder, the 1828 edition of the Opera Omnia of Horace, printed in Henri Didot’s microscopic 2.5-point type is considered by Spielmann “One of the typographical wonders and an unsurpassed feat as far as minuteness and beauty of type is concerned.” It is superbly bound by C. Hardy in full red morocco, elaborately stamped in gilt on spine and covers, gilt dentelles, marbled endpapers, all edges gilt. Estimate: $1,500-$2,500 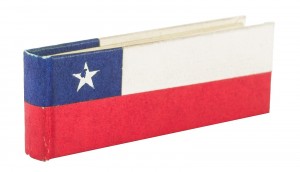 The rare Rosemary Press edition of the Rubaiyat of Omar Khayyam, was printed for the members of the Chile Club. Amongst the rarest of the many miniature Rubaiyats, it is one of nine different printings by the Rosemary press for various clubs and organizations offered in this auction, all are rare. It is housed in a custom book-shape box of full blue morocco and bound in a Chilean flag design. Estimate: $1,000-$1,500

Fine facsimile edition of the Carmina Sapphica by Horace originally printed at the Ashendene Press in 1923 for the Library at Queen Mary’s Doll House is also featured. One of the rarest and most desirable of miniature books published by Anne & David Bromer housed in a custom-made folding half morocco case. Several other of the Bromer miniatures are also included in this sale. Estimate: $600-$900 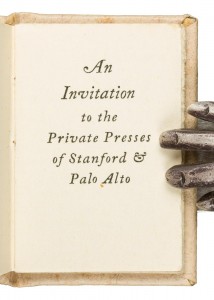 An Invitation to the Private Presses of Stanford and Palo Alto is a very rare California miniature. It is copy number 1 of only 9 copies printed and only one other copy located per OCLC/WorldCat. This copy is accompanied by an unfolded proof sheet with the complete text printed on each side. Estimate $500-$800

Other highlights in the sale are: a collection of ten miniature artist’s books by Brooklyn book artist Soraya Marcano, , most issued in edition of ten copies or less and rarely offered for sale (Estimate $1,000-$1,500); a complete collection of all six Dard Hunter titles published by REM Miniatures (Estimate: $800-$1,200); one hundred volumes from Norman Forgue’s Black Cat Press, a nearly complete collection of the titles issued by the press (Estimate: $3,000-$5,000); twelve micro-miniatures on Medieval history printed by Roger Huet, housed in a fine rosewood case (Estimate: $700-$1,000); and the Gleniffer Press edition of Three Blind Mice, former record holder for the smallest letterpress printed book in the world, one of several former holders of this record included in this auction (Estimate: $500-$800).

One Response to Miniature Books from a Gentleman Collector