PBA Galleries will hold an auction of Fine Literature with Beats, Bukowski and the Counterculture on January 13th, 2022. The sale comprises Over 450 lots of fine literature and ephemera, featuring scarce works from the counterculture and the Beat Generation, as well as a large selection of Charles Bukowski, including an original typescript story. The sale includes a number of rare works by Ray Bradbury, Ernest Hemingway, John Steinbeck, and numerous other important figures of the 20th century. The sale also features a number of scarce works of fantasy and mystery, with works by Anne Rice, J.R.R. Tolkien, Edgar Rice Burroughs and others. The Beat/Counterculture section includes a number of important works by the likes of Jack Kerouac and Allen Ginsberg, as well as a selection of scarce literary journals and posters. 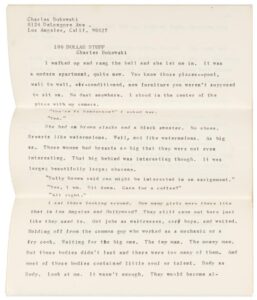 Leading the way is quite possibly the only existing copy of an original typescript story by Bukowski, titled “100 Dollar Stuff,” submitted to Robert Singer, for his literary journal in-the-works which was to be called “Speed Fast Reading.” The journal never came to be, and there is no record of the story appearing in any journals or included in any published collection (Estimate: $4,000-$6,000). Another Bukowski highlight is a scarce copy of The Wedding, privately printed in an edition of 40 copies on the occasion of Bukowski’s marriage to Linda Lee Beigle. With 12 original photographs by Michael Montfort, this copy includes the rare suppressed photograph of Linda fixing Hank’s fly (Estimate: $2,000-$3,000). 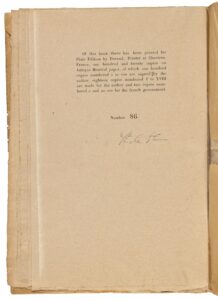 The second book published by Plain Edition, a publishing venture undertaken by Gertrude Stein and her partner, Alice B. Toklas, Before the Flowers of Friendship Faded Friendship Faded, is offered in the publisher’s original saddle-stitched binding with coarse brown wrappers. Stein’s work written on a Poem by Georges Hugnet is signed by her at the colophon (Estimate: $3,000-$5,000). Another highlight from an American expatriate is a signed second printing of Ernest Hemingway’s For Whom the Bell Tolls (Estimate: $2,000-$3,000).