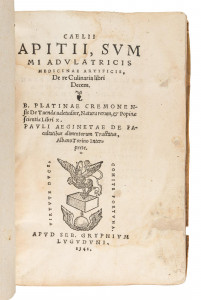 On Thursday, November 8th, PBA Galleries will host their first sale devoted exclusively to books about Food & Drink. Up for auction will be over 350 lots of rare and collectible works on the culinary and gastronomical arts, with fine wines and cocktails, recipe books, housekeeping manuals, and others. Included are early African American and Creole cookbooks, Southern Cookery, classic 20th century cookbooks, early California cuisine, charity cookbooks, nutrition, medicinal plants, and much more.

Commonly considered the first cookbook, Apicius’ summi adulatricis medicinae artificis, De re culinaria libri decem. B. Platinae Cremonensis De tuenda ualetudine, natura rerum, & popinae scientia libri X from 1541, is thought to have been originally written in manuscript form in the 4th and 5th centuries. The foods described give an idea of the dietary habits of the ancient world around the Mediterranean, but the recipes are geared for the wealthiest classes, and a few contain what were exotic ingredients at that time (e.g., flamingo). The descriptions of herbs and spices not only show what was being used in cooking at the time, but also gives a picture of what was being grown and traded at the time. (Estimate: $5,000-$8,000) 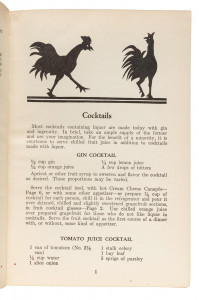 The Joy of Cooking

Two first editions by African Americans figure prominently in the sale. Published in 1881, What Mrs. Fisher Knows About Old Southern Cooking… by Abby Fisher was the second book by an African—Americana woman published in the U. S. Fisher, born a slave in Mobile, Alabama, moved to San Francisco after the Civil War and became a successful caterer winning numerous awards for her preserves at county fairs. The 1906 San Francisco earthquake destroyed many copies of this book making extant copies quite rare (Estimate: $8,000-$12,000). The Lone Star Cook Book and Meat Special, was the first cookbook written by a black hotel chef. Published in 1929 in Nashville, Tennessee, this copy is inscribed by author Artaway Fillmore to his mother and father, who was also a renowned chef (Estimate: $5,000-$8,000). 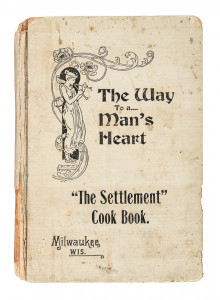 The Settlement – The Way to a Man’s Heart

From the drinks section of the sale, Études sur le Vin, 1866, is a first edition of Louis Pasteur’s seminal work on fermentation in wine Illustrated with wood engravings and 32 color lithograph plates depicting fermentation, the work explains Pasteur’s work that demonstrated fermentation was the result of minute living organisms and the heating process recommended was the earliest description of “Pasteurization” (Estimate: $800-$1200).
A rarity from the 20th century is a first edition of The Joy of Cooking. One of only 3,000 copies, author Irma Rombauer published it in 1931, at the height of the Great Depression, her own expense to help her recovery from her husband’s suicide. An American classic, the book remains in print today. (Estimate: $3,000-$5,000) 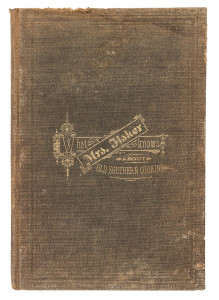 Other featured lots in the sale include: The Creole Cookery Book, 1885, the first cookbook of Creole cookery, and the first New Orleans recipe collection (Estimate: $5,000-$8,000); The Way to a Man’s Heart, the first edition of “The Settlement” cook book, published in Milwaukee in 1901 (Estimate: $4,000-$6,000); Alexandre Dumas’ posthumous culinary masterpiece, Grand Dictionnaire de Cuisine, 1873, the author of swashbuckling adventures taking on the marvels of gastronomy (Estimate: $2,000-$3,000); and The Carolina Housewife, by Sarah Rutledge, published in Charleston, South Carolina in 1851, the second edition of the classic Southern cookbook (Estimate: $1,200-$1,800).

The sale will begin at 11:00 am Pacific Time and the public may preview the auction Monday, November 5th, 1 – 5 pm, Tuesday and Wednesday, November 6th and 7th, 9am – 5pm and on Thursday, November 8th, 9-ll am at PBA Galleries in San Francisco. For more information, please contact the galleries at (415) 989-2665 or [email protected]