On January 12th, 2017, PBA Galleries will host the sale of Rare Medicine & Science – Inventory of Edwin V. Glaser Rare Books. This sale is comprised of over 500 lots of rare and important works of medicine and science from the 16th through 20th centuries covering scientific breakthroughs and discoveries, medical investigations and innovations and much more. Ed Glaser, a northern California bookseller specializing in medical and scientific works, has, after nearly fifty years, chosen to take down his shingle, and disperse his scholarly inventory through sale at public auction. From the classic works of Hippocrates and Paracelsus through the advances of the 20th century, the collection presents an important cross-section of knowledge and achievement in the healing arts.

A highlight of the sale is Zwen Tractatus des hocherfarnen by Paracelsus. The first part of this rare 16th century printing of tracts from the Swiss physician, botanist, and occultist deals with pharmaceuticals while the second part is a rather mysterious text on the metal electron. This copy contains extensive early annotations on the front and rear blanks and in the margins. Estimate: $4,000-$6,000. 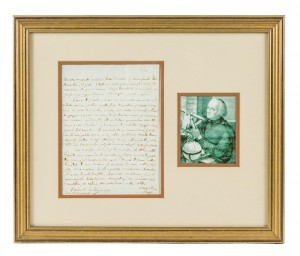 Also, featured in the sale is an autograph letter from the Italian astronomer Giuseppe Piazzi. Piazzi was a Catholic priest who founded an observatory at Palermo in 1790. One of his major accomplishments was the discovery of Ceres, a dwarf planet, the largest member of the asteroid belt. The letter describes Ramsden’s micrometer including a small sketch and other significant scientific content from a major figure in the history of astronomy. Estimate: $10,000-$15,000.

The first comprehensive treatise of physiology, Albrecht von Haller’s Elementa Physiologiae Corporis Humani will be up for auction. Offered in 9 volumes including the supplement from 1757-1778, much of the information contained came directly from research work done by Haller and is the culmination of his most important contribution to the development of physiology. Estimate: $4,000-$6,000.

Zehen Bücher von Kalten, Warmen, Minerischen und Mettalischen Wassern, from 1612 by Leonhard Thurneisser Zum Thurn is a rare analysis of mineral waters and the river systems of Germany. The work deals with the chemical substances in mineral waters, describes analytical processes and the making of mineral waters. Estimate: $2,500-$3,500.

Other highlights include the first edition in English of Lorenz Heister’s General System of Surgery in three parts, 1743, the standard work on surgery in the 18th century (Estimate: $3,000-$5,000); the 1777-76 Traité des Maladies Chirurgicales et des Opérations qui leur Conviennent, a text on surgical diseases and operations, by Jean Louis Petit, one the first surgeons to operate on breast cancer (Estimate: $2,500-$3,500); The Oculus hoc est of Christof Scheiner, 1652, an important analysis of the science of physiological optics by a pioneer of the subject (Estimate: $2,000-$3,000); A Compleat History of Druggs by Pierre Pomet, 1712-15, the first edition in English of the most complete materia medica of its time (Estimate: $2,000-$3,000); and De Aegritudinibus Infantium Tractatus, by Lelnello Vittori, 1544, one of the earliest textbooks of pediatrics (Estimate: $1,500-$2,500).

The sale will begin at 11:00 am Pacific Time and the public may preview the auction Monday, January 9th, 1 – 5pm, Tuesday and Wednesday, January 10th and 11th, 9am – 5pm, and Thursday, January 12th, 9 – 11am or by appointment at PBA Galleries in San Francisco. PBA accepts absentee bids by phone, fax or email or bids may be placed during the sale in person or online. For more information, please contact the galleries at (415) 989-2665 or [email protected]