Record Prices Among Strong Results at May 31st Americana Auction 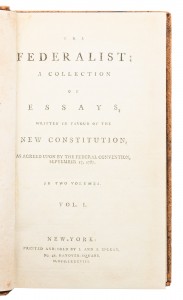 On May 31st, PBA Galleries offered a significant selection of rarities in their Americana with Manuscript Material – Travel & Exploration – Cartography Sale.

A rare First Edition of The Federalist, the highlight of the auction, justifiably considered the most important book in the political history of the United States, soared to $223,500 over an estimate of $80,000-120,000 in bustling bidding by a full bank of phone bidders. The Federalist, presenting essays by founding fathers James Madison, Alexander Hamilton, and John Jay, meant to convince state legislatures of the fragile confederation that had just gained independence from Great Britain, to combine in a United States with a common government and purpose under the new constitution. This copy of the rare 1788 first edition, of which only 500 copies were printed, was one of the exceptionally rare deluxe copies printed on thick superfine royal writing paper, the two volumes bound in contemporary sheep. The importance of the Federalist to the early development of the great political experiment that was the United States cannot be overstated. The strong price was the most a book has ever sold for at PBA Galleries, topping the $212,000 fetched by a first edition fetched in 2008 for a copy of the official account of the Lewis and Clark expedition. 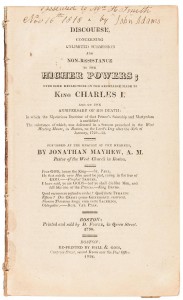 A presentation copy of Jonathan Mayhew’s A Discourse, Concerning Unlimited Submission and Non-Resistance to the Higher Powers; with some reflections on the resistance made to King Charles I bearing the signature of John Adams, the second President of the United States volleyed between two online bidders to reach $10,800. Estimated at $8,000- 12,000, the inscription for the presentation is not in Adams’ hand and although previous records named the recipient as daughter Abigail “Nabby” Smith, this is now thought to be in error and it is possible the book was presented to a more distant relation of Abigail Adams (nee Smith).

A typed letter, signed “Edgar.” 22 lines, on letterhead of the Director of the Federal Bureau of Investigation, to Franklin Roosevelt’s special adviser Harry Hopkins in 1942, framed along with a copy of a newspaper article about the saboteurs, and a porcupine emblem they had carved while aboard a submarine sold for over twenty times the low estimate of $500 with a price realized of $10,200. J. Edgar Hoover relates that “When I saw you the other day, I believe I told you that the group of saboteurs who landed on Long Island from a German submarine had carved out, while on the submarine en route to the United States, miniature porcupines from aluminum. The reason that they selected the porcupine to be carved was because the submarine which they came on was named the ‘Porcupine.’ I am enclosing herewith two of these miniature porcupines, as I thought the President and you might like to have one each as a souvenir of this incident.” Four saboteurs landed on Long Island, and four more in Florida. Two of them surrendered, and gave information to the FBI which led to the capture of the other six. The two informants were given lengthy prison sentences (commuted by Harry Truman in 1948) – the other six were executed. 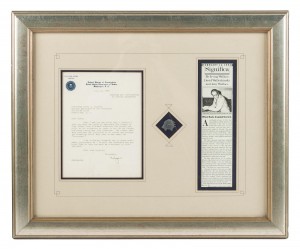 The first appearance in a magazine of The Defence of Fort M’Henry, the four-stanza poem that was to become The Star-Spangled Banner, in the November 1814 issue of The Analectic Magazine commanded a price of $4,800 topping the high estimate of $3,500. In 1950 Carroll Wilson wrote in Familiar Quotations (page 391) about the rarity of this issue of The Analectic Magazine in wrappers, stating that “No other copy of this . . . number is known to have survived in original state.” Other copies have since come to light, but it is a rare survival. As Filby & Howard document, this issue of the Analectic Magazine was published in early November, 1814, about seven weeks after the famous bombardment; the poem’s appearance here is preceded by numerous newspaper appearances and a few separate printings in small broadside formats, but this is its first publication in a “permanent” format.

The Rough Riders, signed by author Theodore Roosevelt, trounced the presale estimate of $600-900 reaching a price of $3,600. This is Teddy Roosevelt’s own account of his heroic actions in Cuba when he famously charged San Juan Hill, catapulting him to the Governorship of New York, the Vice Presidency and the White House.