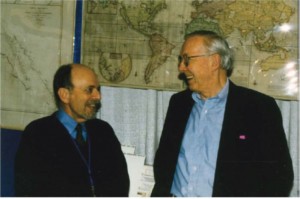 Warren Heckrotte began collecting rare books and maps in the 1960’s – making his first purchase, of three “decorative” maps, in Geneva, Switzerland, in 1963, where, as a physicist at the Lawrence Livermore Laboratory, he was selected to serve as a representative of the Atomic Energy Commission (later the Department of Energy) at the ongoing nuclear test ban treaty talks between the United States and the Soviet Union. The purchase intrigued Mr. Heckrotte, and inspired him to learn more about antique maps, beginning, as many do, with a study of R.V. Tooley’s Maps and Map-Makers.

Back in the San Francisco Bay Area, he began frequenting local book dealers, such as John Swingle’s Alta California Bookstore in Berkeley, Bob Hawley at the Holmes Book Company in Oakland and later his own Ross Valley Book Company in Albany, and of course Warren Howell at the venerable John Howell-Books off Union Square in San Francisco. These dealers helped to shape his collecting interests, and his eventual focus on western America and the northern Pacific. He frequently returned to Geneva for the ongoing treaty talks, where in his off hours he would rummage through the book stores and flea market of the city, fascinated by the history to be discovered, and purchasing cartographic rarities. On his trips between the U.S. and Switzerland, he would often stop in London, and formed a close relationship with John Maggs. He bought from other antiquarian booksellers and map dealers as well, studying their catalogues, and also began to purchase from auction houses.

Not content just to acquire material, Mr. Heckrotte studied it in scholarly fashion, and drew his own conclusions. He contributed articles to such publications as Terra Cognita (academic journal of the Society for the History of Discoveries), The Map Collector, Mercator’s World, and the newsletter of the California Map Society. He edited and contributed to California 49: Forty-nine Maps of California from the 16th Century to the Present, published in San Francisco in 1999. Mr. Heckrotte also curated a number of exhibits of his material at the Book Club of California. PBA Galleries is pleased to make use of Mr. Heckrotte’s scholarly descriptions of his collection in the preparation of the catalogues.