The Ristigouche and Its Salmon Fishing

On Thursday, June 1st, PBA Galleries proudly presents Part I of The Richard Beagle Collection of Angling and Sporting Books. The auction will consist of over 300 lots of rare and important works on angling and fishing, plus scarce accounts of big game hunting and adventures in the wild, gathered over multiple decades. The collection includes numerous books containing original specimens of flies, rare limited editions, many signed and inscribed copies, and more, all in superb condition.

Highlighting the sale is The Ristigouche and Its Salmon Fishing, in two volumes, by the American fishing enthusiast Dean Sage published in Edinburgh, 1888 and limited to 105 copies. Arguably the rarest and most beautiful book on salmon fishing, Sage starts with the geography and history of the Ristigouche, one of the best salmon-fishing rivers in the world, before dealing with the habits of the salmon and the history of fishing clubs, while entertaining the reader with many interesting fishing stories throughout. (Estimate: $15,000-$25,000)

A number of books with flies are featured in the sale including a rare deluxe issue of Leonard West’s The Natural Trout Fly and Its Imitation. Published in 1912, this is one of only a few copies of the deluxe issue containing 13 color plates and 108 specimen flies bound in on sunken mounts (Estimate: $10,000-$15,000). A signed copy of Dry Fly Entomology by Frederic M. Halford is one of 100 copies of the Edition De Luxe. In two volumes, the second volume contains 100 actual specimens of tied flies (Estimate $7,000-$10,000). Eleven folders displaying 164 hackle specimens accompanies William Baigent’s A Book on Hackles for Fly Dressing. Baigent was considered one of the most skillful fly fisherman in England and his book is only one of perhaps 40 to 80 copies (Estimate: $4,000-$6,000). 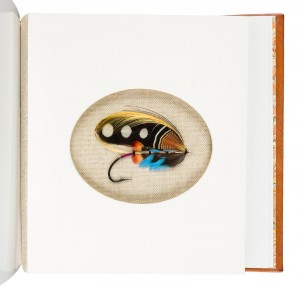 “A Quaint Treatise on ‘Flees, and the Art a Artyfichall Flee Making’. Published in 1876 it is By an Old Man Well Known on the Derbyshire Streams as a First-Class Fly-Fisher a Century Ago and is Printed from an Old Ms. Never Before Published, the Original Spelling and Language Being Retained. The editorial notes, patterns of flies and samples of fly-making materials supplied by W. H. Aldam (Estimate: $3,000-$5,000). The Salmon Flies of Major John Popkin Trahern, edited by Paul Schmookler, one of 28 Deluxe Edition copies with full-page color illustrations, and one of only a few bound in full morocco, with an original fly tied by Schmookler (Estimate: $3,000-$5,000).

Other sale highlights include Salmon Fishing on Cain River by Lee Sturgis published in 1919 is one only five of the original fifty copies printed to survive the fire that destroyed the others (Estimate: $10,000-$15,000). Adventures in Fishing, by “Three-six”, i.e. Thomas M. Potter, founder of the “36” club, with much on the Catalina Fishing Club, signed by the author, quite rare. The three sixes are a six thread line, and a six foot, six ounce rod (Estimate: $3,000-$5,000).

The sale will begin at 11:00 am Pacific Time and the public may preview the auction Tuesday and Wednesday, May 30th and 31st from 9am to 5pm and on Thursday, June 1st, 9-11am at PBA Galleries in San Francisco. For more information, please contact the galleries at (415) 989-2665 or [email protected]