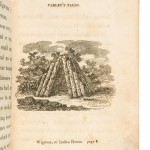 On Thursday, August 10th, PBA Galleries will host an Americana – Travel & Exploration – World History – Cartography sale of over 450 lots of historical materials relating to the Americas and the world at large, including books, manuscripts, ephemera, photographs, maps, and more. There are letters and booklets relating to slavery and the African-American experience; rare California ephemera and promotional items from the 19th and 20th centuries; important works on the exploration of the American West; a collection of scarce clipper ship sailing cards; early directories of states and cities; desirable real estate and cadastral maps of local California communities; and more. Travels to the far reaches of the world includes excursions into Africa, central Asia and the subcontinent, the Middle East, China and Japan, the great cities of Europe, and the steppes of Russia.

Featured in the sale is a first edition of the First Peter Parley book, The Tales of Peter Parley About America. This very rare children’s book by Samuel Griswold Goodrich, published in 1827, was the first of over 100 different titles issued with the Peter Parley name and its success spurred many imitations. Goodrich explains in the preface that he was conveying “to children, under the guise of amusement, the first ideas of Geography and History.” (Estimate: $10,000-$15,000)
Ka Palapala Hemolele a Iehova ko kakou akua o ke Kauoha Kahiko a me ke Kauoha Hou i unuhiia mailoko mai o na’olelo kahiko is a complete Bible in Hawaiian. Printed at the Hawaiian Mission Press in 1843, it is the first octavo edition, but second edition of the Bible in Hawaiian. (Estimate: $5,000-$8,000). Also in the sale is an original WWII propaganda poster in Russian. With four hand-stenciled color images depicting vivid scenes of Russian victory and German defeat, it is one of some 1250 different posters produced by Tass during the war. (Estimate: $4,000-$6,000) 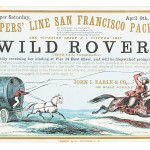 For the Californiana collectors sale highlights include a superb 19th century photograph album with nearly 60 original images of California and Colorado, including rare views of San Francisco’s Chinatown (Estimate: $4,000-$6,000); twenty-one lots of clipper ship sailing cards including an original color engraved card for Wild Rover with an iconic image representing sail power versus steam (Estimate: $2,500-$3,500); the 1884 Mining Map of Inyo County by J. M. Keeler with an early view of Mt. Whitney from Lone Pine, folding into its original printed paper wrapper trimmed in gilt (Estimate: $2,000-$3,000); and an extensive archive of original blueprints & designs for various features of San Francisco’s Transbay Terminal which was open from January 14th, 1939, until it closed on August 7th, 2010, to make way for the Transbay Transit Center (Estimate: $4,000-$6,000). 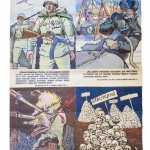 Two additional noteworthy lots are featured in this sale. A rare subscriber’s copy of the first edition of George Anson’s Voyage Around the World will be offered. This edition includes 42 copper-engraved maps, charts, views coastal profiles, etc., most folding but is also known for the text chronicling adventure and discovery as Anson roamed the Pacific in pursuit of Spanish treasure (Estimate: $2,000-$3,000). Also in the auction is Francis Trevelyan Miller’s 1930 The World in the Air in two volumes and one of the limited Pioneers Edition signed by important figures in aviation history including Glenn Curtiss, Louis Bleriot and others. This is the “first historic collection of official prints and photographs from government archives and private collections recording five thousand years of man’s struggles to conquer the air” (Estimate: $2,000-$3,000).

The sale will begin at 11:00 am Pacific Time and the public may preview the auction Monday, August 7th, 1-5pm, Tuesday and Wednesday, August 8th and 9th from 9am to 5pm and on Thursday, August 10th, 9-11am at PBA Galleries in San Francisco. For more information, please contact the galleries at (415) 989-2665 or [email protected]