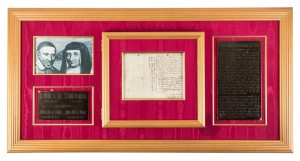 On Thursday, September 20th, PBA Galleries will offer Rare Books and Manuscripts from the Library of James “Ted” Watkins. Included in the sale are over 300 lots of rare, interesting, and significant material from six centuries, spanning the gamut of Western civilization, from the early days of Christianity to modern science fiction.  Ted Watkins’ interests were many and varied, with few bounds on his intellectual curiosity. Primary to his collection is the large number of scarce works relating to the Christian religion, particularly Catholicism. There is also a selection of modern literature, including collections of Ray Bradbury and Flannery O’Connor plus illustrated books, fine bindings, history, political science, and more.

The highlight of the sale is a two-page autograph letter from Louise de Merillac de Gras, with 11 lines of notations in the hand of Vincent de Paul. This rare correspondence between two future saints who worked together in the co-founding of the Daughters of Charity (later Sisters of Charity) in 1634, is beautifully matted and framed with both sides visible in a hinged frame which is attached to a larger frame, with dual portrait and three engraved plates, one identifying the signers, one with an English translation of the letter, and the third with a long descriptive essay. (Estimate: $10,000-$15,000) 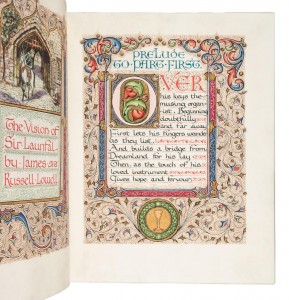 Illuminated manuscript of The Vision of Sir Launfal

Other featured religious lots include the Illuminated manuscript of James Russell Lowell’s The Vision of Sir Launfal. Exquisitely bound by Sangorski and Sutcliffe in full brown morocco with onlay green and black elaborate Celtic style design, gilt-tooled patterns and borders, spine with raised bands, compartments decoratively lettered and tooled in gilt, the volume was also designed, written out, illuminated by them (Estimate: $10,000-$15,000). The Epistles on Morality (Morali sopra Job) of Pope Gregory I, 2 volumes, published in Florence in 1486, is one of the storehouses of moral science of the Renaissance and his most esteemed work (Estimate: $3,000-$5,000). 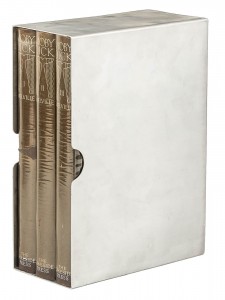 Herman Melville’s classic novel of the sea, Moby Dick or the Whale, is limited to 1000 copies, housed in the publisher’s original aluminum slipcase. The three volumes are illustrated with 280 reproductions of pen, brush and ink drawings by Rockwell Kent. This copy is signed by Kent in pencil, with a sketch of a stylized whale tale, the design on the front cover of the book (Estimate: $7,000-$10,000). Another limited edition work housed in an aluminum case in this sale is the Arion Press edition of Edwin A. Abbott’s Flatland: A Romance of Many Dimensions. Limited to 275 copies, the volume is in an aluminum frame case binding of a unique and innovative design (Estimate: $1,200-$1,800).

Other highlights of the sale include: Flannery O’Connor’s first book, Wise Blood, in the original dust jacket, inscribed by her to the senior editor at Houghton Mifflin (Estimate: $5,000-$8,000); Zane Grey’s Tales of Fresh-Water Fishing, 1926, specially bound for the author in three quarter green morocco, with Grey’s personal blindstamp at the top corner of the front flyleaf (Estimate: $3,000-$5,000); The Autobiography of Alice B. Toklas, the first edition, 1933, in dust jacket, inscribed by both Gertrude Stein and Alice B. Toklas (Estimate: $1,500-$2,000); and a rare first edition of Girolami Dandini’s Missione apostolica al patriarca to Mount Lebanon, 1656, with descriptions of customs and manners of the Turks, the cities of  Candia and Tripoly, etc. (Estimate: $2,000-$3,000).