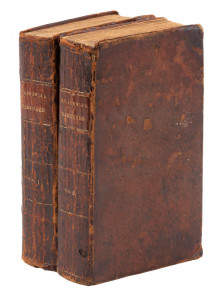 On Thursday, February 21st, PBA Galleries will offer a sale of Rare Americana, Travel & Exploration, Hawaiiana, World History and Cartography. On the auction block will be over 400 lots of rare, significant, and captivating material revealing the exploration, history, culture, ethnology, and geographic knowledge of the world, from the unknown western reaches of North America to the vast plains of central Asia, with a little bit of paradise in the South Sea. Includes are books, maps, prints, photographs, manuscript material, ephemera, and more.

The rare first two volumes of the Millennial Harbinger from Alexander Campbell’s Restoration Movement, which sought “the unification of all Christians in a single body patterned after the church of the New Testament.” The movement blossomed concurrently with, and competed with, Mormonism and many Campbellites leaving the fold to join the Mormons. In the second volume Campbell published his notable challenge to the tenets of Mormonism, called “Delusions” (pp. 85-97), which was issued separately in pamphlet form in 1832. Delusions is the important first printed article on Mormonism in book form. Estimate: $10,000-$15,000. 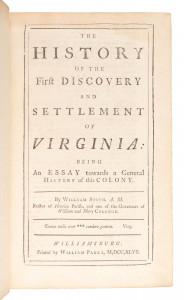 A third edition of one of the earliest imprints of a domestic history printed in America, William Stith’s History of the First Discovery and Settlement of Virginia, covers the history of the colony up to 1624. Printed in 1753 by William Parks in Williamsburg, the copy on offer bears the armorial bookplate of George Grenville, the “father of the Stamp Act,” so regarded for his institution of taxation of the American colonies when Prime Minister of Great Britain, causing widespread opposition. Estimate: $6,000-$9,000.

Two maps are featured in the sale. L’Europe divisée selon l’etendue de ses principales parties…, a spectacular 1761 hand-colored copper-engraved map of Europe is especially notable for its surrounding pictorial vignettes which include whaling in Nova Zemlya; bullfighting in Madrid; pillaging by Tartars; swordplay by Hungarians; and cockfighting by the English (Estimate: $5,000-$8,000).  A rare hand-drawn Civil War era map, likely of Confederate origin, depicts portions of Western Tennessee, Northern Alabama and Mississippi.  This was a key area of the western theater of the war, where the Battle of Shiloh was fought, bisected by the Tennessee River, crossed by several railroads. Identified are roads, rivers, river towns, railroad lines, rail stations, and cities (Estimate: $2,000-$3,000).

A number of lots relating to African-American history will be offered. Of particular interest in this section is the third cookbook by an African-American woman, Pauline’s Practical Book of the Culinary Art for Clubs, Home or Hotels. This very rare first edition contains an eclectic mix of 700 recipes and one hand-written recipe for Prince of Wales cake (Estimate: $2,000-$3,000).  Jackie Robinson’s autobiography Wait Till Next Year, has a full-page presentation inscription from Robinson to David Wallerstein, and additionally inscribed by co-author Carl Rowan. Wallerstein was a theater executive and a member of the board of directors at McDonald’s Corp., where he invented the fast food chain’s large size fries (Estimate: $2,000-$3,000).

Other featured lots include:  a first edition of the official account of James Cook’s third and final voyage to the Pacific Ocean (Estimate: $$3,000-$5,000); Girolamo Benzoni’s history of the New World, Novae novi orbis historiae, 1578, revealing Spanish atrocities against the indigenous peoples of the West Indies, as well as against French settlers in Florida (Estimate: $4,000-$6,000); and the 1886 first issue of J.M. Hutchings’ In the Heart of the Sierras, in a rare full morocco binding with gilt-lettered presentation from the author to the Board of Commissioners managing the Yosemite Valley (Estimate: $2,000-$3,000).

The sale will begin at 11:00 am Pacific Time and the public may preview the auction Tuesday and Wednesday, February 19th and 20th, 9am – 5pm and on Thursday, February 21st, 9-11 am at PBA Galleries in San Francisco. For more information, please contact the galleries at (415) 989-2665 or [email protected]