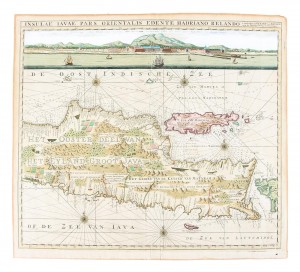 On Thursday, January 25th, PBA Galleries will offer five hundred lots of rare and significant items of historical, cultural, and visual interest, including books, manuscripts, photographs, and ephemera, with a particularly strong gathering of cartographic material. Ranging from the western slopes of the Sierra Nevada, with much on California history, to the peaks of the Rocky Mountains, and the bayous of the Old South, the Americana section offers original material capturing the dynamic growth and culture of the New World over the centuries. Next there are travels to the far reaches of the globe, the mysteries of the occident and orient unveiled. Finally, the charting of the world over five centuries is recorded, with maps of the East Indies, Asia, Europe, and the lands of the western hemisphere, with many scarce maps of the towns and cities of California.

Two interesting maps are among the highlights of the sale.  A striking map of the island of Java in the Dutch East Indies, on two sheets by Gerard van Keulen, c.1728, pictorially depicts topographical features as well as animals populating the island, agricultural fields, towns and cities. The map is copper-engraved, hand-colored with hand-colored vignettes and views A beautiful large panorama of Batavia, now Jakarta, stretches across the eastern sheet (Estimate: $3,000-$5,000). William Keeler’s National Map of the Territory of the United States from the Mississippi River to the Pacific Ocean, 1867, is a large detailed map of the western US. The lithographed, hand-colored map details mineral deposits, forts, and roads with a number of Indian reservations delineated in manuscript (Estimate: $3,000-$5,000). 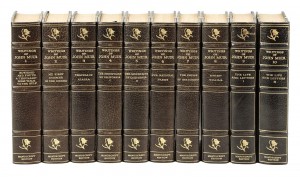 The Writings of John Muir

Also, featured in the sale is the Manuscript Edition of John Muir’s Writings, 10 volumes, 1916-1924. Beautifully bound in half black morocco with gilt, the set is illustrated with numerous photogravure and halftone plates, with the first 8 volumes each with an additional hand-colored gravure frontispiece.  A manuscript leaf by Muir from The Mountains of California is mounted to the front preliminary flyleaf of Volume 1 (Estimate: $3,000-$5,000).  Another beautifully bound book, Zane Grey’s, Tales of Fresh Water Fishing, is one of small number of copies specially bound by the publisher for the author’s personal use.  It is signed by Grey and has his embossed name stamp on the front flyleaf (Estimate: $3,000-$5,000). 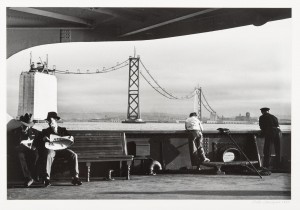 Construction of the SF-Oakland Bay Bridge

Three featured lots include fascinating photographs: a gelatin print photograph of the Construction of the San Francisco-Oakland Bay Bridge, by Peter Stackpole in 1935 but printed later is a superb view taken from the deck of a ferry boat (Estimate: $2,500-$3,500); a collection of 92 lantern slides documenting the mission of a Lutheran pastor to Turkey during the Armenian genocide is offered with related material including a hand-written journal (Estimate: $2,000-$3,000); and an exceptional photograph album chronicling a hunting trip to British Columbia in 1946, contains photographs of the landscape, the participants, and their trophies (Estimate: $1,500-$2,500).

The sale will begin at 11:00 am Pacific Time and the public may preview the auction Monday, January 22nd 1-5pm, Tuesday and Wednesday, January 23rd and 24th, 9am-5pm and on Thursday, January 25th, 9-11am at PBA Galleries in San Francisco. For more information, please contact the galleries at (415) 989-2665 or [email protected]